There is a lot that has happened since last update….

I dont know where to start, on the most exciting news or do it chronologically….

Random order it is.

Last update was from thailand in january, after thailand we went to NZ and there we attended a wedding. it was Garys best friends wedding and he had promised several years ago that he would be there, so naturally we had to go. It was a lot of fun and I even drank a bit of alcohol. Garys friend has the most amazing kid, she’s 3 but when talking to her you think she’s about 7 or 8 even.

Just before we went to thailand we had started moving stuff in in our new apartment, and when we got home we started to move small bits and pieces, We have still not moved everything but our place is pretty packed.

Gary plays cricket for malmö still, they won the last game but is not doing too well this season….

I saved the biggest news for last: We went to Bergkällans kennel (google for it to find it) and got ourselves a puppy. a cocker spaniel. It will be called Feisty.

FEISTY
It is defined in many dictionaries as ‘aggressive,
excitable, nervous, touchy’ but is now more often used to mean
‘spirited’, ‘assertive’, ‘able to speak up for oneself’ (usually
applied to women). It has also appeared in an advertisement for a
high-performance car, presumably suggesting that the car is fast,
tough, and exciting to drive.
Words tend to change their meanings with time, sometimes through an error which gradually
becomes accepted (as with decimate), often by being applied to different things, as in this case. Feisty
is changing too quickly for dictionaries to keep up with – and it
remains to be seen what the accepted meaning will eventually be.

Photos of the puppy below. 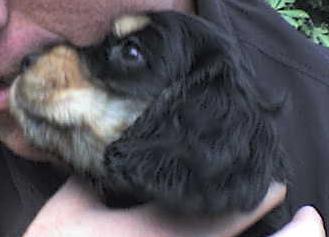 I think it is a good idea…..
I want to take it to a show/exhibition, just to see how we do, and the training for show is beneficial in everyday life-obedience…. But first I will try to find out more about it.

thats the general news, In my life things have also happened.

I re-connected with an old friend, I found out that an old classmate of mine has been living in NZ long enough to get a kiwi-accent and also has a new zealand boyfriend.
I am doing some stuff for the genealogical society of Halmstad and taking photos for Hemtjänsten (old-people-s-care-unit)..

I think once we get the puppy I will update more often on funny things it does etc, it also helps that we have got a second computer.